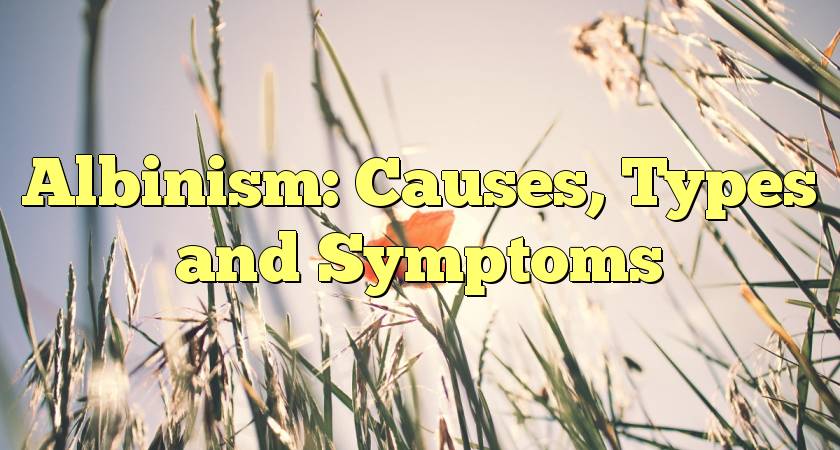 It is often possible to recognize someone with the condition known as albinism by their pale appearance. Light skin, hair, and eyes are all common markers of albinism, though the degree to which the condition affects these traits varies from person to person. It is usually a hereditary disorder characterized by the body’s inability to produce melanin, and is therefore one of the known conditions that can cause hypopigmentation.

Melanin is a skin pigment that regulates the color of a person’s eyes, hair, and skin. There are different types of melanin in the human body and each individual has different levels of the pigment. These factors all contribute to the makeup of someone’s appearance.

What Does Albinism Do?

The most obvious signs of albinism are in the hair and skin. The disorder is associated with traits like white hair and light skin, often lighter than an individual’s close family members. This is not always true, but these are common indications of the condition’s presence.

The outward appearance of albinism can also change throughout an individual’s life. Melanin production may increase at later stages, particularly during the late childhood and teen years. Freckles, moles, and freckle-like lentigines may develop over time, some with pigment and others without. While not a symptom, those with albinism are often at a higher risk of developing skin cancer, and the lack of melanin means skin burns easily in the sun.

While white or brown hair is prevalent with albinism, individuals with African or Asian ancestry sometimes develop red- or yellow-hued hair. Like with the skin, hair color can sometimes darken with age. Regardless of hair color, eyelids and eyebrows are usually white or pale.

The lack of pigmentation for people with albinism also affects the irises of the eyes. This creates the appearance of red eyes. While those with albinism may actually have light blue or brown eyes, the loss of pigment makes the irises translucent, reflecting a red tint in certain lighting conditions.

A less obvious but more disruptive symptom of the condition is vision impairment. Eye and vision problems are common to all types of albinism. This manifests in several different ways, including:

Are There Different Types Of Albinism? What Causes Albinism?

There are two primary categories of albinism, along with secondary types produced by other conditions. Oculocutaneous albinism, or OCA, is the most prevalent form of the disorder. OCA develops when babies receive one mutated gene from each parent. When anyone thinks of the physical features of albinism, like light complexion and hair, it is usually from this variant. Vision complications are common with OCA.

Ocular albinism is another primary type of the disease. Only males develop this form of albinism. It is inherited from their mother via a mutated X chromosome. Ocular albinism is more rare, and its symptoms only affect eyesight.

If not hereditary, albinism can occur as a secondary condition to other hereditary disorders such as Hermansky-Pudlak syndrome and Chediak-Higashi syndrome. Both syndromes have a number of separate symptoms, along with OCA.

How Is Albinism Diagnosed?

Albinism is often found by early childhood if not shortly after birth. An early sign in newborns is the lack of pigment in eyelashes and eyebrows. Doctors can perform eye exams and will monitor the baby for additional signs. Genetic testing is the easiest way to identify albinism. Families with a history of albinism in particular are encouraged to take this route.

Doctors have to rely on visual clues, such as pigmentation change to determine if a patient has the condition. At that point, ophthalmologists can conduct eye exams specific to albinism.

While there is no cure for albinism, treatments are targeted at mitigating symptoms. The good news is that people with primary albinism, those not affected by other syndromes, have the same lifespan as anyone else. Managing albinism requires taking simple, common-sense precautions: avoiding the sun and using a sunscreen with a high SPF, wearing sunglasses, and working with an eye doctor to correct vision issues.