Hypopigmentation, also known as skin depigmentation, is the loss of the skin’s color due to disease or trauma to the skin. It is identified by pale or white spots on the skin and is more noticeable in people with darker skins because of the color distinction between the patches and their skins. It however occurs to all skin types and is a common pigmentation disorder.

The condition is as a consequence of the partial or total loss of melanin. In most cases, the loss is partial. The element in our skin that gives us our color is melanin, which is produced by skin cells called melanocytes. When these melanocytes reduce their melanin production, the condition that results is hypopigmentation – it affects all races and is not gender specific.

Generally, any trauma to the skin that might result in scarring of the skin is a cause for this condition. These causes may be categorized into four major groups, which consist of:-

Even Simple Burns Or Cold Burns

Changes in skin color are very common after sustaining burns or freezing. This is because melanocytes are really delicate to variations in temperatures.

Deep skin burns will always result in hypopigmentation while superficial burns may be reversible. Below -7 degrees Celsius, irreversible damage to the affected area occurs. This is because melanocytes are immobilized and melanin transfer from the melanocytes to the keratinocytes is no longer possible. This condition may last for up to six months before the skin gets back to normal.

However, after prolonged exposure to freezing conditions, the damage may be permanent. This is because of the possible reduction in the number of melanocytes, reduction in melanin production or the lack of melanin transfer.

Be Careful With Procedures/Treatments

While trying to treat skin disorders, certain treatments if not properly done may result in hypopigmentation.

Chemical peeling is one of those treatments that attempt to resurface the skin after contracting damage. While administering this treatment, care should be taken to account for the skin type and the quantity of the phenol used. The Baker phenol peel has an unfortunate history of producing a pasty white skin which was a permanent hypopigmentation.

The use of laser technology in corrective surgery is also associated with this condition. The variable associated with laser resurfacing is the depth of the resurfacing. The hypopigmentation may begin to appear 3-10 months after the procedure and the results are permanent. The factors that might be controlled to avoid this condition include: the number of application sessions, the spectrum at which the individual’s melanin absorbs the laser and the type of laser being used.

It Can Vary Greatly From Person To Person

The rate at which the hypopigmentation occurs varies from individual to individual. This means that melanocytes work differently between people.

A research study was done to analyze the cause of hypopigmented lesions after laser resurfacing. This suggested that hypopigmentation occurs as a result of the inhibition of melanogenesis rather than the killing of the melanocytes. However, critical traumas may lead to melanocytes dying off and thus permanent skin depigmentation.

Skin disorders may also cause hypopigmentation. Some of these diseases include:

This is a disorder caused by the absence of the enzyme that produces melanin. In place of it is a gene that prohibits the production of melanin. Albinism is characterized by the lack of color on the skin, eyes and hair. Due to the total lack of melanin in their skin, these individuals are more likely to contract skin cancer and need to be very aware of sun exposure.

Unfortunately, there is no remedy for this condition. The one thing that can be done is to take steps that control the effects of the sun. This can be achieved through the application of sunscreens and wearing protective clothing. The disease is more likely to affect white people according to statistics.

This is the skin condition that the great Michael Jackson had. It is characterized by white patches of skin, which is caused by malfunctioning melanocytes. This results in areas with melanin and other areas without any pigment at all that appear very white. Unfortunately like albinism, vitiligo is also permanent – although there are many vitiligo treatments to help reduce the symptoms. 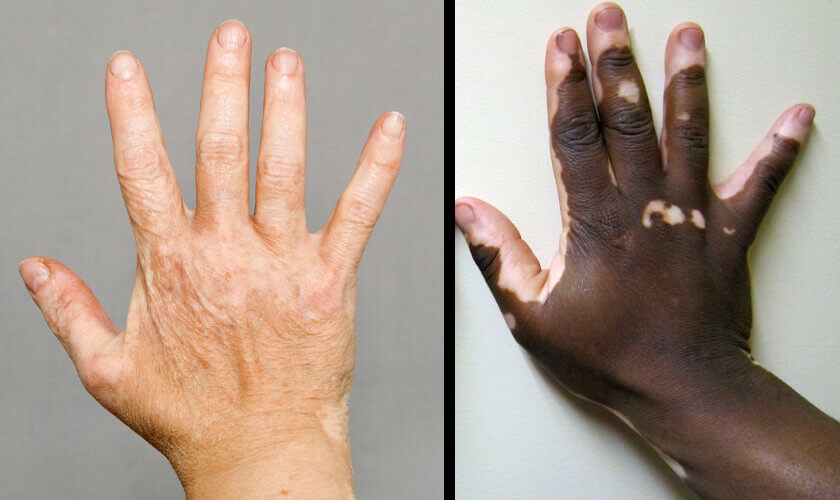 The best way to approach treatment is to first accurately identify the root cause of the problem. As you can see from the above examples, hypopigmentation manifests itself quite commonly among lots of different conditions. Misdiagnosis and treatment of the wrong disease can make things worse or even result in permanent hypopigmentation.

Typically the use of steroids and tar-based preparations are the recommended treatment for hypopigmentation. The steroids act on inflammatory cells while the tar induces melanogenesis i.e. the production of melanin.

Exposure to the sun is also recommended since the ultraviolet rays support repigmentation if they come into contact with melanocytes. However, care should be taken to avoid over exposure. Advanced treatment procedures may include skin grafting and the use of laser or light treatment.

For people suffering from vitiligo, skin lightening creams can be considered. This may sound strange at first but the idea is to help the unaffected areas of the skin blend in with the affected area. This reduction in the harsh edges of the areas with no pigment can greatly reduce the overall appearance.

Hypopigmentation is a common condition that is more likely to affect dark-skinned people. It has many causes and the disorders that are associated with it are numerous. Luckily, you have many treatments options you can explore to treat this disorder. One of the important things to remember is to identify the root cause of the problem. But with proper management the appearance can be reduced greatly or in some cases – depending on the cause – even completely reversed.